The history behind Sylvester Cemetery is the history behind East Atlanta. Flat Shoals Road was once Sandtown Trail which connected Savannah with the interiors of Georgia, crossing the Peachtree Trail at Five Points in downtown Atlanta.

By the early 1800’s the Creek Indians of Georgia who controlled Sandtown Trail were in constant conflict with white European settlers. In addition to these external pressures, the Creeks themselves had serious internal fissures. Resistance-minded Red Stick Creeks clashed with American-friendly factions within the Creek Nation routinely throughout the early 1800’s.

An interesting leader of the time that exhibits the complicated nature of the Native American conflict in Georgia was William McIntosh. McIntosh was a half-Creek half-Scottish chief… Yes, he was a half-European Native American chief that led a faction of Lower Creek Indian towns that mostly supported American assimilation and eventually relocation.

Through treaties in 1821 and 1825 that conveniently bestowed incredible benefits upon his personal estate, McIntosh sold thousands of Creek acres east of the Chattahoochee River to the state of Georgia. Oh, I forgot to mention one of McIntosh’s white first cousins was the Governor of Georgia, with whom he negotiated the deal. Ahem.

While the First Treaty of Indian Springs in 1821 seriously pissed off other leaders within the Creek Nation, McIntosh’s involvement in the Second Treaty of Indian Springs, the treaty in 1825 that also promised removal of Creeks west of the Mississippi, was the final straw. One morning many powerful Creek leaders awoke to discover McIntosh (and other chiefs) had sold their land without their consent.

McIntosh had only included a few other tribal leaders in the negotiations of the land sale. This was a serious charge within the upper leadership of the Creeks; the sentence for such a transgression was death.

One night, within a few months of the 1825 Indian Springs Treaty, several hundred Creek warriors descended upon McIntosh’s plantation similar to the last scene in the movie Scarface. They killed McIntosh and an elderly chief who had also signed the 1825 treaty, burned the McIntosh plantation and confiscated his property (McIntosh owned many slaves).

Removal of the Creeks, Cherokees and other tribes in North Georgia continued throughout the 1820’s and 1830’s (I came across one source that indicated the Creeks were still in the areas around East Atlanta as late as 1838). The Indian Removal Act of 1830 certified their relocation by the Feds, by peace or by force. I could be wrong, but at the time Georgia was one of the largest, if not the largest state in the Union. And as Native Americans vacated thousands and thousands of acres, the state of Georgia found itself in control of it all.

Georgia started running land lotteries in 1805 and continued them through the 1830’s, to release the Native lands to white settlers. The area that now holds Sylvester Cemetery and much of East Atlanta was granted by the state of Georgia to a man named Thomas Simmons in 1834 or 1835 (202.5 acres). But one source I came across indicated a man named Lofton Johnson was the first owner of this property.

The 202.5 acres of property indicates it was most likely an early 1820’s Georgia Land Lottery that granted the land. Many times people won these land lotteries and never did anything with the properties or leased them to others. It could be the state transferred ownership on some sort of default basis to Thomas Simmons, or that Lofton Johnson leased and eventually sold the land to Thomas Simmons.

Anyways, Simmons built a gristmill and a sawmill on Sugar Creek; he damned the creek and created a huge lake (it would become Terry Mill Pond; more on the Terry family below). Sugar Creek still exists, running for a short portion next to and under I-20. By 1837 the Simmons sawmill was one of the largest in the area, supporting many of the surrounding boom towns, including one small settlement three miles away that would become Atlanta.

Thomas Simmons’ good luck wouldn’t last. Just as his mills were reaching full power and full profit his wife became ill and passed away, probably in 1838. When she was nearing death he called in a caretaker from a nearby town to help care for her on their farm (currently located underneath I-20).

The nurse’s name was Elenor Terry, who moved to the area with her family (she was a widow with two small children and a married daughter). Elenor Terry married Thomas Simmons after his first wife died, probably in 1839. And shortly after his second marriage to Elenor Terry, Thomas Simmons himself died in 1841, leaving his huge estate and bustling mills to her.

When Elenor Terry moved to the Simmons farm she had brought her two younger children, Thomas and Elizabeth. The older daughter Nancy followed her mother to the area with her husband James “Spanish Jim” Brown from Lawrenceville, Georgia sometime before 1838.

The young couple is considered the first white settlers of East Atlanta, residing on a homestead near the intersection of Moreland Avenue and Flat Shoals.

The oldest gravestone in Sylvester Cemetery is a child of Nancy and “Spanish Jim” Brown, the infant Elenor R. M. Brown who was born in July of 1837 and died in October of 1838 (it’s the first picture in this article). You can still read the name and dates today.

Franklin Garrett, the noted Atlanta historian and necrologist who was obsessed with Atlanta cemeteries that held the bones of white men, noted the first person buried in Sylvester Cemetery was Thomas Simmons after his death in 1841.

It’s possible that the Brown family graves were moved to the Terry Family Cemetery after the matriarch, Eleanor Terry, buried Thomas Simmons. But the infant Elenor Brown is the oldest at 1838. And this gravestone resides in the old Terry Family Cemetery, which is now at the heart of Sylvester Cemetery.

Thomas Terry, who was only a teenager in 1841 when his stepfather passed away, took over operations. Through the 1840’s and 1850’s the business would become known as Terry Mill and the man-made lake would become Terry Mill Pond.

Thomas Terry would become a very wealthy man. He was sensationally murdered on the streets of East Atlanta in 1861 after being struck on the head with a champagne bottle over a feud. Being a prominent citizen the story drew the complete attention of the Atlanta press. After his murder Terry’s wife, Mary Jane Thurman Terry, would control the mill and the Terry land.

Combined, the Terrys and the Browns held most of what would become East Atlanta. Mary Jane Thurman Terry and following generations of the Terry and Brown clan, would sell off most of the Terry land. Nancy Terry Brown died in 1889 and “Spanish Jim” died in 1893; they would have seven children (not sure if that includes the infant Elenor). They are both buried at Sylvester Cemetery and their markers are clearly visible.

So why the name Sylvester Cemetery? Thomas Terry and Mary Jane Thurman Terry had a son, perhaps just a year old when Thomas was killed by the champagne bottle. This young infant son was named Sylvester Terry. Sylvester grew into a teenager, but unfortunately died (I believe from a splinter in the finger) in 1872.

Shortly after his death Mary Jane Thurman Terry was approached by a church group inquiring about buying land. Mary leased the land to the church in 1873 under the condition they name it Sylvester. That’s why the Methodist Episcopal Church – South built their Sylvester Meeting House. The meeting house is now gone, but the name would eventually transfer to the cemetery, since it was located on the current grounds.

McWilliams would purchase more real estate from the Terry family over the years for his commercial cemetery. Throughout the late 1800’s and into the 1900’s the care of the grounds resided in a few caretakers and the families of the deceased. And over the years many people were laid to rest in Sylvester.

Each year the number of people who remember the dead in Sylvester Cemetery decreases (burials still occur on family plots). And by the 1970’s the cemetery was practically abandoned except for the occasional burial or family member visit, overgrown by not only shrubs, trees and vines, but empty beer cans, burned out stolen cars and piles of trash.

That changed in 2000, when the Sylvester Cemetery Foundation was created. This nonprofit organization is dedicated to the cleanup of the grounds, research of the deceased and restoration of the headstones. They have made significant progress, clearly out debris such as abandoned vehicles, creating an offsite archive and clearing off markers that were covered in dirt and organic growth. But they need help, as History Atlanta discovered during a tour of the cemetery for the Atlanta Preservation Center’s Phoenix Flies series of events. Trash seems to magically appear. Short walls are bulging over. Markers are buried, knocked over or missing. 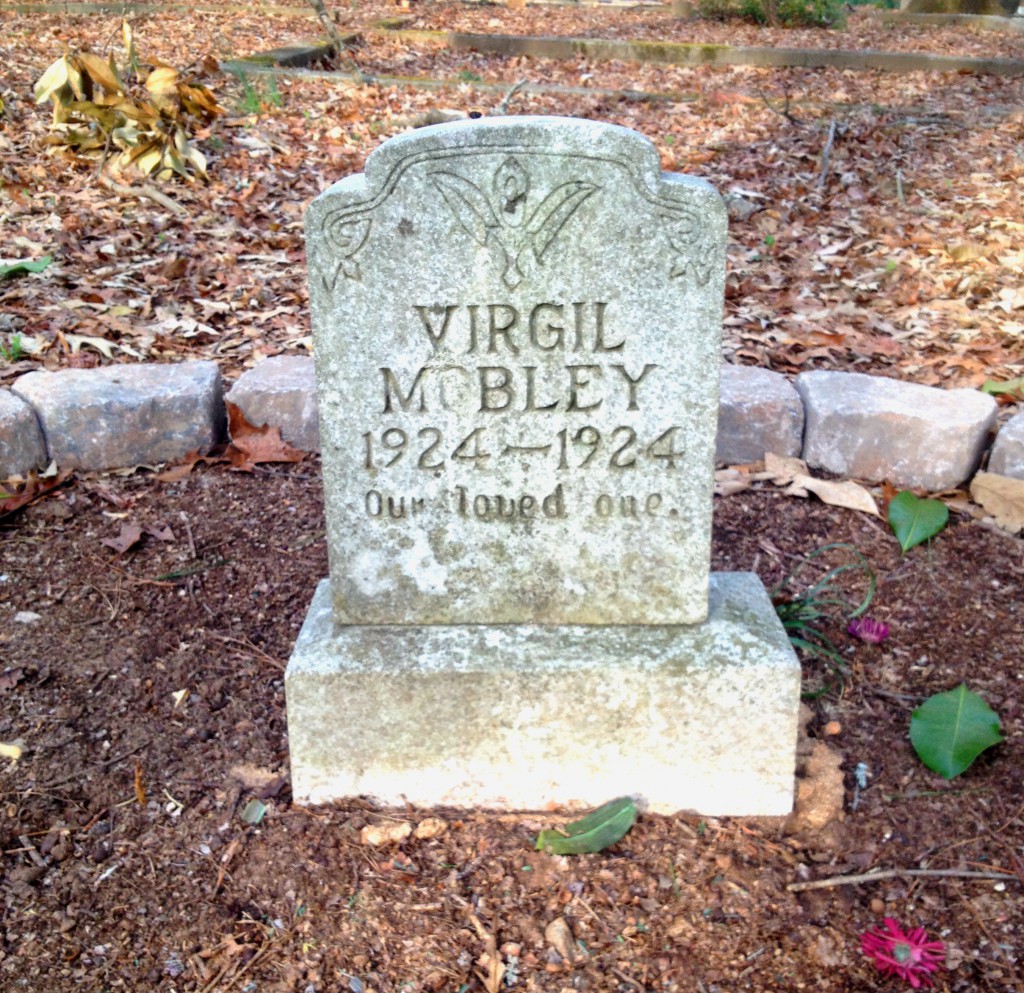